Best Leading Actress 1981: Marsha Mason - Only When I Laugh 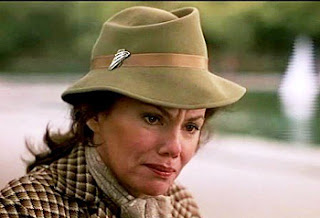 Only When I Laugh is quite an enjoyable film that is especially interesting, if you are aware of some paralells with the actual life of Neil Simon. But apart from that, it's a great exhibition of some wonderful performances.
Marsha Mason plays the leading character Georgia, who we see getting back from the rehab. She used to be an alcoholic and now she is starting a new life. She portrays the joy very well. She is determined to begin a completely new chapter, yet she's not naive about it. In fact, I think that many feminists these times would welcome a film like this in the present. Georgia a strong woman and a very showy part to play. Here must be said that Mason uses all of the given potential.
She has got two great friends, who are waiting for her. One is a gay man played by James Coco and the second is a woman her age, who cares too much about her appearance played by Joan Hackett. Chemistry between Mason and Coco is outstanding. I really believed them, that they have known each other for a long time. The easiness and comfort they talk to each other with, is something that I miss with the chemistry between Mason and Hackett. Especially at the beginning of the film, I felt as if they were some further relatives, rather than close friends. This is mainly Hackett's fault, because in her first scenes she really seemed very reserved. It gets better later in the film, but I thought they are not as close, as with Coco. But it isn't a complaint, because it seems logical on the other hand. Hackett has got her own family to take care of. Coco is single and therefore he might have had more time to spend with Mason.
One excellent part of the film is Georgia's relationship with her daughter. They haven't seen each other for quite a long time and Georgia wants to take care of her. We see in Mason's behaviour the enormous trying to be the best mother. This is portrayed flawlessly and the more their relationship seems to be good, the more devastating will the dramatic change at the end of the film be. Both of the actresses (Mason, as well as Kristy McNichol) did their best and delivered first-class performances.
There is a scene in Only When I Laugh, in which her daughter organised a blind date for Georgia and the daughter's teacher. Georgia thinks the teacher wants to talk to her and he thinks she wants to talk to him. How Georgia finds out what's going on, is very well handled by Mason. What I liked even more was a small conniption. It is overacted, there's no doubt about it, but it fits the character 'I am an actress and you're not going to fool around with me!'
Another example of a great overacting is in her scene at the theatre rehearsal. She plays that she is playing and douring this scene I even had shivers. That's exactly a great example of the overacting I love. There is also a great change between acting and a real emotional outburst, that doesn't seem forced and is also very enjoyable.
There is a scene, in which Mason is supposed to be drunk. She plays drunk extremely well. She doesn't overact the drunkeness, she overreacts just like a drunk person does. She is effective in this scene, as she shows equally well, how her character is having a good time, as well as how serious the situation is.
I really liked this performance. Mason was really great. The only blame I'd have is the occasional inconsistency between the authentic real acting and overacting. Both of them I enjoyed, but together, as a part of one performance they don't work as well as they probably should and could have.
The chances of winning an Oscar: She was worshipped in her times and she was Oscar-less. There must have been some overdue factor and the strong character factor. In spite of that, the year and the campaigning was strong and maybe the film's reputation didn't help. She was the fourth.
Posted by moviefilm at 09:11 No comments: