5. Marion Cotillard - Two Days, One Night
I adore Marion Cotillard as an actress very much, but this is probably her most boring work in years. She is realistic, she handles all the emotions quite well. But it's just a copy of real life and that's it. She doesn't help the film from its deadliness. In fact I would nominate her, but for a a better work she gave in The Immigrant.

4. Reese Witherspoon - Wild
Reese Witherspoon was well cast in this role and she handles a difficult role very well. She has to carry the entire film on her shoulders and has got a good chamistry with her co-stars, as well as with the random people she meets during the hiking. Her voiceover is fitting for the film's purposes and her flashbacks are realistic. This is a performance I don't have many complaints to, just that she might be a bit forgettable (a long time period after watching the film you won't remember her, nor the film itself).

3. Felicity Jones - The Theory of Everything
This is an unshowy part and she is technically just a facility to let the male lead shine. But Jones makes the most out of it. She is charming, likable, has a great chemistry with her colleagues and she gives a very heartbreaking portrayal of a suffering, but loving wife.

2. Julianne Moore - Still Alice
I won't complain about this Oscar win, even though it was a one for an overdue actress and the film was nothing more, than a vehicle to make her finally win. But Moore is wonderful in the film. The development of an Alzheimer disease is perfectly showed and weren't there for a few overacted moments, this would be a flawless performance.

1. Rosamund Pike - Gone Girl
What a performance! At the first sight it might seem conventional, but underneath it's a layered portrayl of a woman, who has got her needs and willings and weaknesses. She was so mesmerizing throughout the whole film, I couldn't take my eyes off of her. She created a real human being and it's an extremely difficult character to pull of . She handles all the twists and secrets wonderfully and is able to bring humour into her portrayal.

Best Leading Actress 2014: Felicity Jones - The Theory of Everything 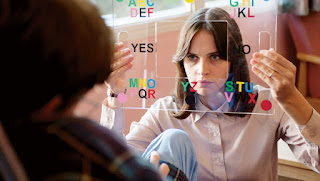 When people talk about The Theory of Everything, they tend to mention Eddie Redmayne first and it's not difficult to understand. It's a very juicy part that could easily be misplayed. But we cannot forget about Felicity Jones, who received her first Oscar nomination for playing Stephen Hawking's first wife Jane.
The role of Jane is not thankful at all. It rarely allows Jones to truly shine and show off her talents. What I really liked about this creation though, is that Jones fights this unthankfullness and never lets her film overshine her. An example of that is a scene at Hawking's parents' house at the beginning of the film. It's those subtle reactions in her eyes that make this performance special. The scene itself is not that important for the film, yet I quite enjoyed it, because of the tiny acting decisions given by both of the co-leads.
As Stephen's disease is proceeding, it has an impact on Jane. One of the first such scenes is when they plays crocket together. It's again a very subtle acting here, yet again great.
When there appears Charlie Cox's character in the film, he falls for Jane. Felicity Jones lets the viewer wonder, if she is also in love with him. It is later revealed in a great moment, in which both of the actors (Cox and Jones) give us honest and outstanding performances.
There is a scene, in which she tries to comunicative with Stephen by a board of letters. Jones shows a huge determination in this scene. She is realistic and really fascinating to watch here. She is a caring woman, exhausted of the difficulties, she has has in life and Jones is heartbreaking here. Just as she is it in the scene with a doctor, in which she explains him that she will do everything for him.
The most fascinating thing about his performance is that it has got its layers. We constantly wonder, if Jane would have done all of this, if she has knew that Stephen will live so long. We wonder, if she loves him anymore.
This is revealed in the late scene of an arguement that led to the divorce between Stephen and Jane. Just as for Redmayne, I consider this to be Jones' best scene. It is a touching and fantastic moment handled extremely well by both of the actors.
The chances of winning an Oscar: Throughout the season I thought they are higher, than they appeared to be. She was young and pretty and the Academy loves to reward those in this category. But then I saw the film and realized how unshowy this role was, so I guess she was the fourth (at the best)...
Posted by moviefilm at 12:45 1 comment: